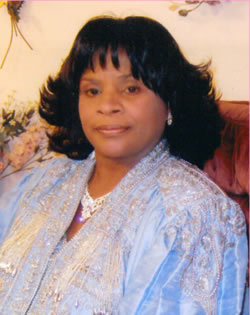 Evangelist Venetia Wilson is an anointed servant of God. Operating in the Authority and Power of the Holy Spirit. She is a person whose life endeavor is devoted to fulfilling the destiny and purpose of God for her life. She is the daughter of the late Supt. Elder James M. Young 1st Administrative Assistant Washington State Jurisdiction. She is a member of Lighthouse Temple Church of God in Christ serving under the leadership of her husband, the anointed Elder Nate Wilson. She serves as church musician, and president of both Women's Day and Church Program Committee.

The youngest of nine siblings, Evangelist Venetia Wilson gave her life to the Lord at an early age, and was gifted to sing. She is known for her orator, musical talents and unadulterated passion and deliverance of the Word of God.

Evangelist Wilson began ministering in church, single-parent homes, prisons, and conferences and with youth groups to communicate the mighty saving power of the cross, and the message of salvation to those who are lost.

Evangelist Wilson is an initiator, and implementer whom God uses to revive the body of Christ. She knows through the miraculous work of the Lord, and the Holy Spirit, that all things are possible to those who believe and are called according to His purpose (Romans
8:28).

With the gift of exhortation and wisdom, God has truly anointed her to impart into those in need of direction, and encouragement a Biblical message of forgiveness, love, hope, healing, and restoration.

Evangelist Venetia Wilson serves as Chairperson of the Executive Board of the Washington State Department of Women, Executive Consultant to Washington States' Jurisdictional Supervisor Mother Gertrude Young, and the Dept. of Women, assisting in overseeing all aspects of the Women's work ensuring the goals; purpose and objectives as set forth by the Jurisdiction and the National Church are being met.

Evangelist Wilson has been an active member in good standing of the following: Executive board, Overcomer's' unit, Public relations board, Planning committee, and Program committee chair.