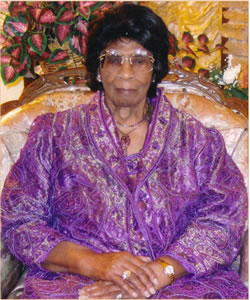 The many gold and bronze trimmed plaques and awards that lined her walls only begin to tell the story of Mother Gertrude Young, the wife of the late 1st Administrative Assistant Supt. James M. Young, Pastor and founder of the Lighthouse Temple Church of God In Christ, located, Seattle Washington.

This visionary woman of God led the Washington State Department of Women for over 50 years.

Working faithfully under her predecessor, the late Mother Rita Douglas, Mother Young's tremendous stamina, wisdom and strong conviction were noted and in 1964 after Mother Douglas' passing, she was appointed State Supervisor of the Washington State Jurisdiction by the first Prelate of that Jurisdiction, the late Bishop Van Goodlow.

As she thought back to the Jurisdiction's very first Women's Convention and Banquet which were held in 1950 at Tolliver's Temple COGIC in Seattle, Mother Young's eyes would sparkle when she recalls how pleased Mother Douglas was with the success of the banquet. Mother Douglas had left Mother Young in charge of the banquet during her absence due to an unforeseen emergency. No one knew that this was the precursor of Mother Young's major role in impacting the great women of the Washington State Jurisdiction.

In 1972, Mother Young presented a proposal to Bishop R.E. Altheimer Jurisdictional Prelate of Washington State, formally requesting permission to implement an Annual State Women's Convention, citing the foundation for growth and development that such a stimulus would afford. Her request was granted, and 42 years later, the Washington State Department of Women continues to enjoy their Annual gathering for fellowship and inspiration.

Mother Young's superior leadership abilities spawned tremendous progress within the Department of Women which, since her appointment, had seen growth from less than 10 to more than 200 Licensed Missionaries. God had used Mother Young to develop and train godly leading women, and Washington State communities, homes, and churches are reaping the benefits.

It was always clear from her words of wisdom that Mother Young valued diversity and understood the dynamics of successful godly relationships. In her stern but sweetly seasoned tone, she would comment that "We've had new people with new ideas, new determinations, and new perspectives which have helped the Women's Department to become stronger and stronger." She would add," I've learned that it is easier for one woman to lead twenty women than for twenty to lead one. If you're going to lead, you have to be out front. I've never seen anyone lead a race parked on the sidewalk. There should be a distinction between leadership and management. Leadership says "Let Us do this or that." For example, if I ask you to give $10, then I should give $10 also. She would imply that on the contrary, management "tells you what to do" - leadership "helps you do it."

In 2007 during the 100th Anniversary of the Church of God In Christ, Mother Young was honored by the National Church with the Centennial Distinguished Honor Award.

We praise God for allowing for allowing us to be blessed with the leadership of the late Mother Gertrude Young... a model of excellence in Holiness and Practical living.
.