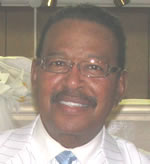 Pastor Elder Nathaniel Wilson committed his life to Jesus Christ in 1978. He began his Christian walk as a member of Resurrection Temple, Pentecostal. He served faithfully for three years under the leadership of his brother Pastor Stevie Wilson, until the untimely demise of his brother Pastor Stevie Wilson. After continued years of service, Pastor Nathaniel Wilson joined the Lighthouse Temple church family in 1995 under the leadership of the late Supt. James M. Young.

He has served the body of Christ in many capacities from Praise & Worship leader, Deacons Board to Current Church Organist, and Financial Chairperson.

He served the church faithfully until he was prompted by the Holy Spirit to go into the ministry. He answered the call to the preaching ministry in Seattle Washington, under the pastoral leadership of Supt. James M. Young and was later elevated into the ministe1ial capacity and was licensed as a minister in 2007.

Pastor Elder Nathaniel Wilson is an enthusiastic leader. Under his devoted and compassionate leadership, God has blessed the church. He has a passion for lost souls with a special place in his heart for young people.

He thrives on the Word of God and is excited to share what God has for us. He enjoys music and is an outstanding organist. He truly loves worshipping God.